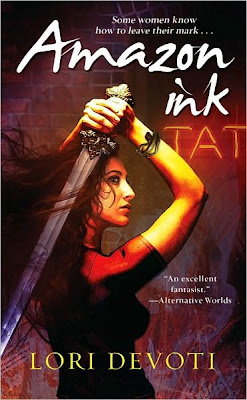 You'd think being born an Amazon a woman would have it made and never want to do or be anything else. I mean, good grief, there's Wonder Woman with her brass bra and invisible airplane and Xena Warrior Princess with that really cool frisbie thing she pelts the bad guys with and it spins right back in her hand. But, you know, there's one terrifying creature not even an Amazon can defeat - a baby. As a nanny, I've seen the most powerful Real Life Kick-Butt Heroines transformed into mushy mamas in an instant. So, when I read about AMAZON INK over at Tia's book review blog, Fantasy Debut, I just had to have it. I emailed Ms. Devoti and she snail-mailed it right to me. http://fantasydebut.blogspot.com/

As mushy as mamas can get with their babies, if you've ever encountered a mama Polar Bear you know they're anything but mushy when their cubs are threatened. This is why I am perpetually baffled why there are not more Kick-Butt Heroine Mamas in Paranormal Romance and Urban Fantasy. In fact, until AMAZON INK landed in my P.O. Box, I only knew of Susan Grant's heroines in her SFR novels, like CONTACT. But, I guess they don't have as many Polar Bears in New York City, where the big publishers hang out, as they do here in Alaska. Anyway... http://susangrant.com/

Mel's an Amazon who's rejected her birth-culture and at first I couldn't imagine why. These woman are large in a good way and in charge. Men are toys to be used for one good thing and discarded.

Over the centuries since they populated Greek mythology, they've adapted to life among humans who have little tolerance for their magic. Things got better once women got the Right to Vote in the United States, but they still have to move secretly. They've set up 'safe camps' for their Twelve Tribes.

Mel rejected that life, took her daughter, and started a tatoo parlor with her mother and grandmother.

Harmony (an interesting name for the daughter of such a conflicted woman) knows little of her true heritage and believes herself to be just a regular teenage girl. And that's exactly how Mel wants her to stay, no matter how much her mother and grandmother nag her.

But, then, a mysterious killers starts depositing murdered Amazon teenagers on Mel's doorstep. Of course, she's horrified. Of course, her Mama Bear instincts are on ten. However, she also doesn't want to blow her cover with her daughter or the rest of her 'normal' life. So, she performs the traditional Amazon death rituals for them and secretly takes them to an Amazon safe camp so the bodies can be returned to their families. Doing this without the Amazons figuring out she made the delivery is not easy.

All this forces Mel to relive why she left the Amazons.

Mel also had a son. And she wanted to keep him.

Boys are considered worthless in Amazon culture and her son was disposed of without her consent. While Mel's mother and grandmother didn't understand her strange attachment to a son, they did love and support Mel enough to leave the Amazons with her. They've hoped and tried to convince her to go back ever since.
.

Meanwhile, Mel's got humans to deal with. The police are trying to find out why teenage girls are being murdered in the area and Mel needs a new tatoo artist for her business. Of course, she only hires women tatoo artists. During the hiring process, she must choose between the most qualfied candidate, a man, and the second-best one, a woman. Although she refuses to admit it, the fact that the man, Peter, is handsome makes her unorthodox choice easier. For the first time ever, an Amazon, Mel, affords a mere male the dignity of professional status in her place of business.
.

Before things can get cozy, however, the Amazon Queen shows up royally ticked off at her former best friend, Mel. The Amazons figured out Mel was the one who delivered the bodies and now they believe Mel's the murderer too. They're determined to bring her in. Mel's family remains loyal while Mel struggles to keep her daughter safe and ignorant. And then an annoying human male detective shows up asking her questions too.

Well, goshdarnit, what's a mama to do? If you're a mama, you'll probably figure it out. Mamas always do whatever's necessary to protect and provide for their babies, whether they're six weeks old or sixteen years old. It's just when you're an Amazon Mama, it often involves a variety of weaponry not available to the rest of us.
.

If I'd seen AMAZON INK in the store, I wouldn't have looked twice. At most, I would've looked at the cover and groaned. "Oh, good grief, another stereotypical Kick-Butt Herone. For those readers, like me, who prefer a buffet to the same ol' thing every day of the week, AMAZON INK will drag you into the Paranormal Romance and Urban Fantasy section of the booksore, or back. The appeal of Mel is all in her motivation - it's *Primal* and instantly understood by anyone who's procreated. Sex is great, but any dog can do it. Survival? Well, yes, that's primal, but a parent will sacrifice his or her life in an instant for his or her child. That's primal and profound.

AMAZON INK hit the bookshelves in May, so it might not still be on the shelves right now. If it's not, I say it's worth ordering on-line. Or, your bookstore will probably order it for you and then you won't have to pay for shipping. Remember, though, buy NEW because that's how authors make money so they can keep writing the stories you love. Here's Lori Devoti's website link- http://www.loridevoti.com/