Today’s news focuses on Regency releases. I know, I know. Regency is supposed to be dead, and rightly so, correct? Tell that to Candace Camp. 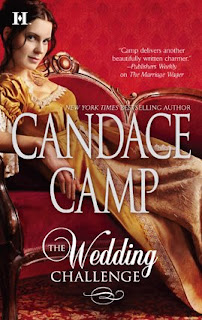 The latest in her matchmaker series, The Wedding Challenge, comes out this month. “Lady Calandra should have suitors beating down her door. But her overprotective brother, the Duke of Rochford, has managed to scare off every suitable gentleman. Every man except the mysterious Earl of Bromwell, that is. Callie finds herself drawn to the enigmatic earl, despite her brother's almost violent protestations.
In defiance of her brother's wishes, Callie devises a plan to see Bromwell again, enlisting the help of matchmaker Francesca Haughston. But when shadowy secrets about the duke and the earl come to light, it may be too late for Callie to see that she's walked straight into a trap.…” 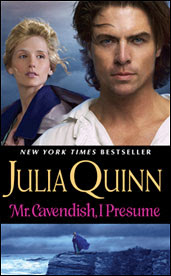 Fresh off her RITA win for The Secret Diaries of Miss Miranda Cheever, Julia Quinn releases Mr. Cavendish, I Presume this month. “There went the bride... Amelia Willoughby has been engaged to the Duke of Wyndham for as long as she can remember. Literally. A mere six months old when the contracts were signed, she has spent the rest of her life waiting. And waiting. And waiting...for Thomas Cavendish, the oh-so-lofty duke, to finally get around to marrying her. But as she watches him from afar, she has a sneaking suspicion that he never thinks about her at all...
It's true. He doesn't. Thomas rather likes having a fiancée—all the better to keep the husband-hunters at bay—and he does intend to marry her...eventually. But just when he begins to realize that his bride might be something more than convenient, Thomas’s world is rocked by the arrival of his long-lost cousin, who may or may not be the true Duke of Wyndham. And if Thomas is not the duke, then he’s not engaged to Amelia. Which is the cruelest joke of all, because this arrogant and illustrious duke has made the mistake of falling in love...with his own fiancée!”
A 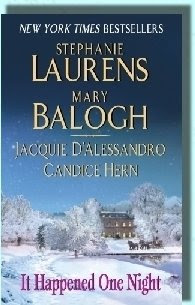 nd my personal favorite Regency author, Mary Balogh, has an anthology coming out in October with an intriguing premise: each novella has the same basic plot. A man and a woman meet for the first time in ten years at an inn, either by chance or design. The action of the story spans no more than twenty-four hours. Ms. Balogh’s story in It Happened One Night, Spellbound, "brings the hero and heroine together at a small village inn on May Day. Both have been stranded there as the result of the collision of a stagecoach and a curricle. They have met before, and the memories are bitter on both sides. But for one day and one night they have to co-exist, and they do so against the background of a village fair and maypole dancing. Will twenty-four hours be sufficient time to erase years of anger and pain?"
As always, if you have news for me, please contact me (Robyn) at the link on the left. Thanks!
Posted by Robyn at 6:26 AM

Great job, Robyn! The Wedding Challenge has a gorgeous cover. I love the expression on the Heroine's face.