Hello, blog buddies! Since I’ve taken a new job, and it’s taking every available brain cell I have, Tuesday News will be every other week. But there are some great books out there- namely, Rowena Cherry’s KNIGHT’S FORK, releasing Oct. 8. 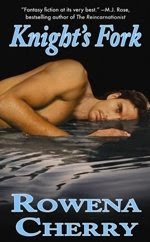 “I’m at your service in this, Ma’am. I’ve never refused a fight.”


The Queen Consort of the Volnoth needs a sperm donor, and only one green-eyed god has the right stuff. Little does she know she has pinned all her hopes on the crown jewels of the fabled Royal Saurian Djinn. Not only is he the son of her greatest enemy, but he has taken a vow of chastity.
The Saurian Knight is caught between a problem father who has all the moral integrity of a Mafia Don, and a married Princess who would stop at nothing to have his seed in her belly. No matter which way he turns, he’s “forked.”


Taking the wrong lover…in the wrong place, at the wrong time…is dangerous. And when the High and Mighty intervene, it can be fatal. Can true love and a pure White Knight’s virtue triumph, when society loves a right royal scandal? 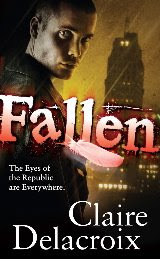 Our very own Kimber Chin, who reviews here as K, told me about Claire Delacroix (aka Deborah Cooke), who had a new release last Tuesday, FALLEN. She got a great quote from Linnea Sinclair and you know how we love Linnea around here!

"The Eyes of the Republic are Everywhere.

When her estranged husband's mysterious death is declared an accident, Lilia Desjardins knows that it is a lie. She leaves all she knows to risk the dark heart of the Republic - only to find that she herself has been targeted by forces unknown.


Adam Montgomery will do anything to complete his earthly mission, even if he had to tangle with the enigmatic Lilia Desjardins. But when his contact is murdered and he must rely on Lilia's silence to save him from the slave dens, Montgomery knows that his wings were only the first sacrifice demanded of him.

As danger and intrigue surround them, Lilia and Montgomery realize that they must work together - body, mind and soul - in order to save the world."


They both sound like ripping good stories to me. Happy reading!
Posted by Robyn at 6:44 PM

Thanks Robyn!
Claire/Deb is such an awesome, generous person and I LOVE her writing!

Nice roundup! Rowena is the Queen of Clever and folks should check out her ingenious word play.

I recently read the first few pages of FALLEN and it promises an intense ride. It's so great that I have another new SFR author to add to my site! Well, I better get going because the list is starting to get quite long....

K, Heather, these have made my TBR pile bigger, that's for sure!