Good morning blog buds! Thinking otherworldly thoughts today, courtesy of my 15 year old son’s positive obsession with Star Wars. The movies are okay, but what he likes are the books. Any opinion of mine is countered with a lengthy diatribe on exactly who is and is not on the Jedi Council, who is and is not a Master, who defeated whom in battle, who is the best swordsman, etc., etc. (Mace Windu, in case you were wondering.) 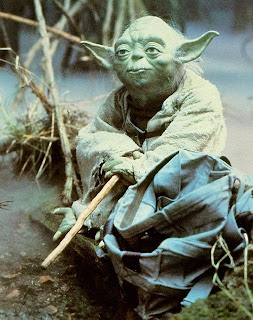 I’ve thought for a while that I needed to introduce him to some science fiction that doesn’t require a little green man that "smarter than you are, he is." So thank you, Kimber An, for your shiny new blog designed for YA Sci Fi. Love ya!


Rose Fox at Publisher’s Weekly posed this question: Why are there no female space pirates? 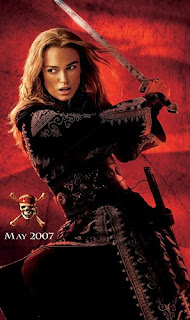 From her blog post:
“My question is, why aren't there any masked she-pirates in space? A Google search for "female space pirates" turns up very little. Elizabeth Moon, R.M. Meluch, and Lois McMaster Bujold--to name just a few--put women into space opera, but those female characters are all part of reasonably legitimate business or government ventures, and they feel no need to disguise themselves. In fact, despite the popularity of the old-fashioned sort of pirate (thanks in great part to the Pirates of the Caribbean movies and Talk Like a Pirate Day), interstellar piracy as a whole seems to be on the decline. I can't remember the last time I saw a novel about genuine space pirates, as opposed to ex-military con artists or ex-con military operatives. I think the Next Big Thing will be blending the golden age of masked she-pirates with the golden age of science fiction to produce space wenches, who disguise themselves as men--or aliens, or robots, or even ninjas, their dreaded hereditary enemies--and find true love while seeking revenge and plunder among the stars.”

Shoot yes! Until next time, Space Wenches!
Posted by Robyn at 5:50 AM

That is such a freakin' awesome idea, Robyn. It reminds me of PIRATICA by Tanith Lee, which I reviewed right here in January or February. It's an Alternate Earth story. Besides female pirates, the heroine's mother was a legendary pirate and had raised her right there on her pirate ship. Well, you know how annoyed I am that there are no mommies commanding starships in the fictional future when there are plenty of mommies commanding corporations, courtrooms, and states Right Now in the Real World. Tanith Lee has an awesome booklist. PIRATICA is Young Adult, by the way.

PIRATICA sounds fabulous. I've got to tell my daughter about that one.

Tanith Lee's booklist includes both YA and adult novels, mostly Fantasy I think.

I am so excited to read PIRATICA right now! Thanks for the suggestion, and for keeping the buzz about space wenches alive!

Wow! An old plot of mine was about a female space pirate! Maybe I need to dust off that old plot and take a second look!